Musical past and present in one rambling run-on sentence: I first picked up a guitar in the late 70’s & have never put it down since, having started writing in my teens, I joined my first band whilst away at school (playing to a captive audience of teenagers most Saturday nights for 3 years), & moving onto ‘proper bands’ in the 80’s and 90’s, recording & performing all over the North West of England.. until the 00’s.. when we hiked up the writing and recording & formed NorthernAdult with my good friend and musical genius Rick Welton..

Is there a particular song that brings a tear to your eye?
The Smith’s: “I won’t share you’’

The First Album you ever bought?
Bowie’s ‘Aladin Sane’ from Woolworths in Altrincham. I remember Mum was not happy about some of the rude lyrics in ‘Time’, hence listening times were sometimes ‘assisted’. I had not at that point purchased Ian Dury’s, ‘New Boots & Panties’, which would later trip me up, in a similar fashion..

How would you describe your perfect day?
Walking in the lakes with the family on a hot summers day – stopping off for a cold beer at the Masons Arms and then crashing out around a fire-pit…

What would your friends say they appreciate most about you?
My sense of humour

What is your most valued material possession?
My Gibson ‘Mid-town’.

Who were you, or would you be nervous to meet?
Johnny Marr (Guitar Hero of mine) – met JM on a flight to Lisbon to see him at Nos Alive 19 – He was very relaxed with me taking a selfie! (looks like I’m stealing his wallet, which i wasn’t!) 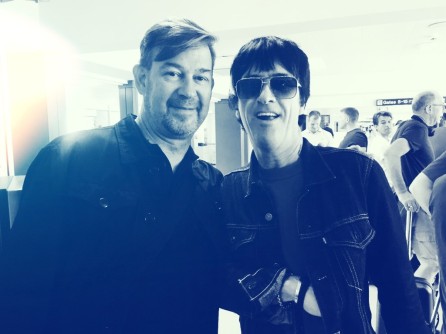 If you could blink your eyes and be in a favorite place right now, where would that place be?
On the balcony of the ‘Acantilado’ in Cala Galdana, Menorca, over-looking the beach, watching the sun go down.

Is there something you would like to do more of in the future?
Travel more.. New York, San Francisco, Australia..

Where would you like to find yourself in ten years?
Living a healthy, happy life with my family around me and just enough money to make it comfortable for all of us..!!